FACTS
Garnets are the birthstone of January with an excellent hardness of 7-7.5 and are popular for their brilliance resulting from their high refractive index.
The name itself comes from the Latin word “Garanatus”, meaning ‘seedlike’, in reference to Pomegranate due to the stones looking like the bright red seeds you find inside this fruit.
This gem has been popular throughout history as there was a necklace worn by a young man in a grave that dated back to 3000 B.C. (proof of the hardness and durability of the stone). The largest stone is said to have been owned by the King of Saxony and was over 465 carats in size. Plato even had his portrait engraved on a Garnet by a Roman engraver.
Bohemia (now a part of Czech Republic) was once the largest source of Almadine Garnet, and even at one point in time, the cutting, polishing and mounting of Garnets was a very rich industry for that country. Many Bohemian castles and churches had magnificent interiors showcased with this stone.
Another variety of Garnet are the Tsavorite, originating in Africa and known for their emerald-green colour. First discovered in Tanzania in 1967, this variety has become one of the most popular and expensive of Garnets, due to its rarity.

COLOURS
Garnets are a set of closely related minerals forming a group, with gemstones in almost every colour.

Almadine Garnet
Almandine occurs in a range of reds, including brownish-red, orangey-red and purplish-red. They will typically have darker tones compared to other red gems, but top-quality specimens do have red colors similar to that of Ruby stones. 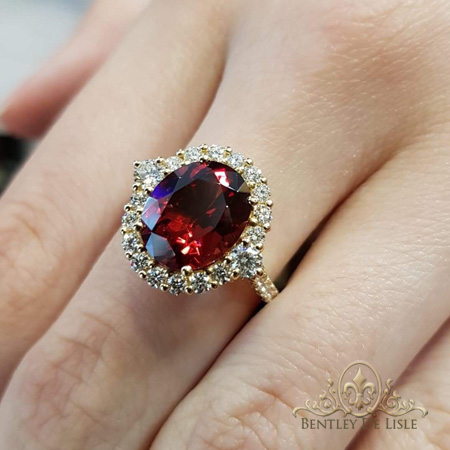 Tsavorite Garnet
Highly sought after for their emerald-green colour and rarity. 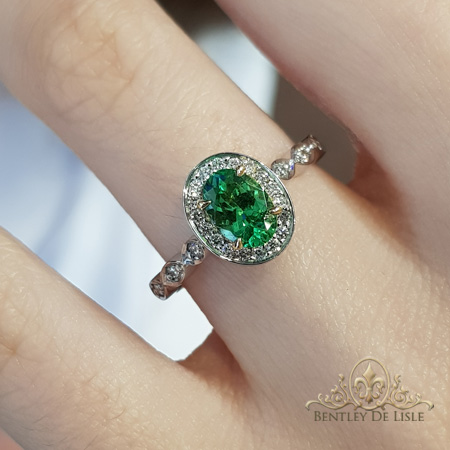 CARE
Garnets are a softer gem and because of that they require a little bit more TLC.
Avoid wearing them while doing heavy work, at gym or gardening (which we strongly advise to remove them). Like all coloured gems, more regular cleaning will keep them bright and sparkly.